Your Handheld Mobile Device Might Actually Be Made by Bluebird

Sometimes companies change the labeling on their products, and Bluebird is no exception. Bluebird, a South Korean designer and manufacturer of handheld mobile devices, used to identify their products by the brand name Pidion. As a result, many of their devices bear that name instead of “Bluebird,” which has been used on all of their products since 2013. With different names being used to represent the same company, it can be confusing and difficult to find replacement parts, especially for older devices.

Bluebird’s products have been selling into global and industrial companies, and the thousands of field users inevitably need to replace parts such as batteries, USB cables, and charging cradles. For example, users who have been operating the Pidion BM-150R PDA device with Schlage access control management software in numerous buildings and schools often need replacement batteries or USB cables to keep their application operating. To further complicate finding parts, Schlage refers to their device as the Schlage Handheld Device or HHD, not the BM-150R.

Another Bluebird device, the Pidion BM-170 PDA, has been used by thousands of users doing e-Clinical study, which collects ePro / eDiary data. Though the users know they are using ERT or PHT’s ePro solutions, they don’t always know which device they are using but need a replacement battery, chargers, or cables. Airline or ticketing companies sometimes use the Pidion BIP-1300 or BIP-6000 devices for their field applications, and because these devices are older, the replacement parts are hard to find.

If you need a replacement part for your device but don’t know its name or brand, remove the battery and read what is written on the battery itself or on the back of the device. A Bluebird device will usually have either “Bluebird” or “Pidion” written on it. 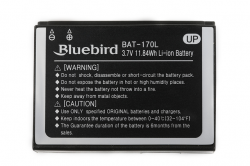 Here is a list of the Bluebird accessories we carry in our online store: